Over the past years, the University of Southeastern Philippines (USeP) has seen significant development in terms of its academic and administrative domains. The University aims to produce world-class graduates and relevant research and extension through quality education and sustainable resource management

Recently, the USeP Office of the University Registrar released enrollment data of second semester of S.Y. 2019-2020 showing the number of enrollees of the USeP Obrero Campus.

Currently, there are a total of 5,946 students (higher education and advanced studies) enrolled in Obrero Campus which has decreased compared to the 6,513 number of enrollees during the first semester of S.Y. 2019-2020. The data also include figures of the University’s sister campuses namely: USeP Mintal Campus, USeP Bislig Campus and USeP Tagum-Mabini Campus. The recorded number shows 753, 1,424 and 247, respectively. This, making a sum of 8,485 number of enrollees in all four campuses for this school year’s second semester, falling 651 short compared to the first semester’s 9,136.

Dr. Bonifacio G. Gabales Jr., VP for Academic Affairs, noted that these figures are most likely expected due to the senior high school transition. It can be recalled that the pioneering batch of the K to 12 (Grade 11 and Grade12) started last 2016 which resulted in a lesser number of student enrollees not just in USeP but in majority of universities in the country.

Dr. Gabales also added that only 50% of the University’s carrying capacity was acquired due to the transition of senior high school. In the succeeding years, these figures are expected to gradually increase and by 2022 the University will be looking forward to a normal student population that will reach as high as 10,000-12,000 in Obrero campus alone. (KMDavid) 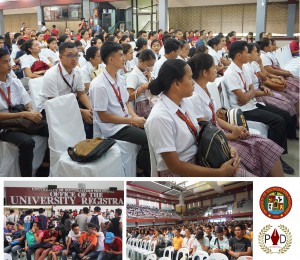