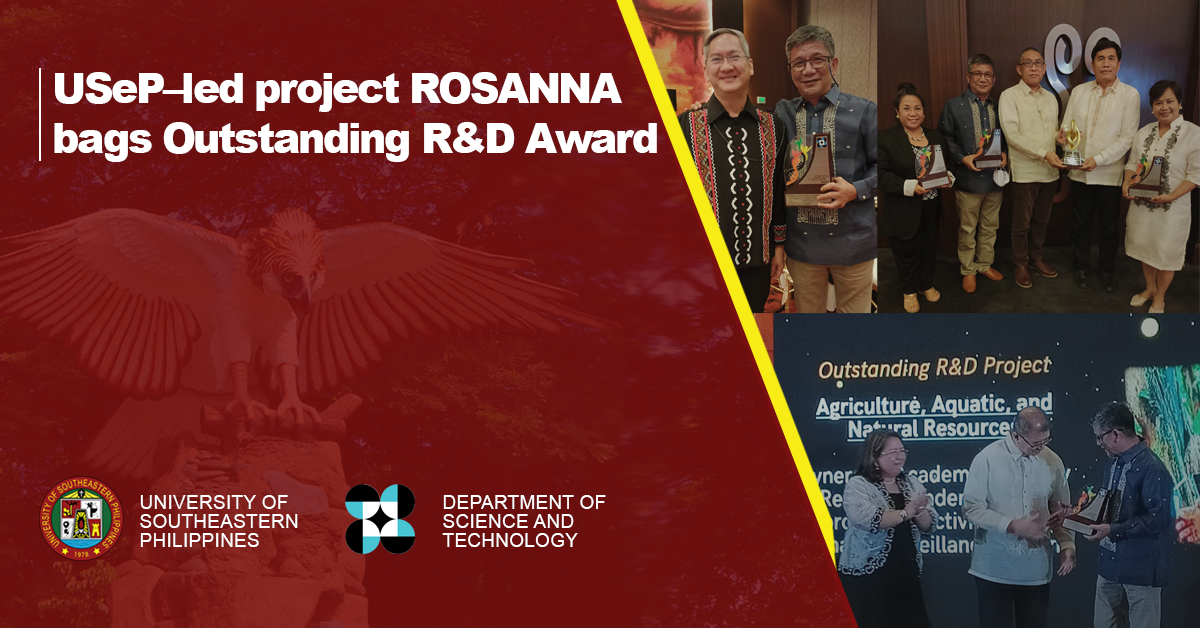 13 June 2022, Pasay City- Another breakthrough has been seized by the team from the University of Southeastern Philippines (USeP) for the project ROSANNA, or Real-time Online Surveillance for Banana, as it was hailed as the Outstanding R&D Project-Agriculture, Aquatic, and Natural Resources for its remarkable contribution to advancing Science, Technology, and Innovation (STI) in the country. The said award was given by the Department of Science and Technology (DOST) Secretary Fortunato Dela T. Peña, during the DOST 64th Anniversary celebration on June 13, 2022, at the Sofitel Hotel, Pasay City.

ROSANNA is a mobile application developed to monitor banana plantations with its agricultural disease surveillance system, capable of gathering and disseminating disease-related information at the farm level. It is the first collaboration between the University of Southeastern Philippines (USeP) and Hijo Resources Corporation (HRC), a big banana company in the region. The said project was conceptualized to mitigate the prevalence of diseases such as black sigatoka, banana bunchytop diseases, Panama diseases, and moko, which have caused substantial threats to the region’s banana industry.

The inception of the idea for Project ROSANNA can be traced back to the proposal titled “Synergize Academe Industry Research Undertakings to Improve Productivity through Development of a Banana Diseases Surveillance System” crafted by a team of USeP. The project was eventually funded by the DOST under its Science for Change (S4C) Program—Collaborative Research and Development to Leverage Philippine Economy (CRADLE). The S4C-CRADLE program emphasizes collaboration between academe and industry, which will readily utilize the technology generated out of the project.

Using the ROSANNA mobile app, the “spotter” shall retrieve data in the field where the selected banana tree has its respective QR code representing every parcel of the experimental area. Data will be sent to the supervisor and manager to be processed and analyzed to determine the extent of damage caused by the disease. ROSANNA, thus, provides an apt and timely decision-making basis for managers to reinforce interventions to prevent disease spread and further threats.

Project ROSANNA was conducted in a 10-hectare area of Hijo Resources Corporation (HRC), a 340-hectare banana plantation in Madaum Tagum, Davao del Norte. Concluded in November 2019, the USeP-led project was successfully realized through the expertise of Dr. Val A. Quimno, Dr. Cecirly G. Puig, and SMAARRDEC Director Gilbert A. Importante.

Project ROSANNA, embodying the spirit of innovativeness in the AANR sector, proves that early detection is, indeed, the best prevention. Captivating the interest and positive regard of various industry players in the region, this innovation may serve as an ideal precedent for further partnerships between the University and various key sectors to save the banana industry, one of the region’s top commodities, from any potential threats of “sagging”.