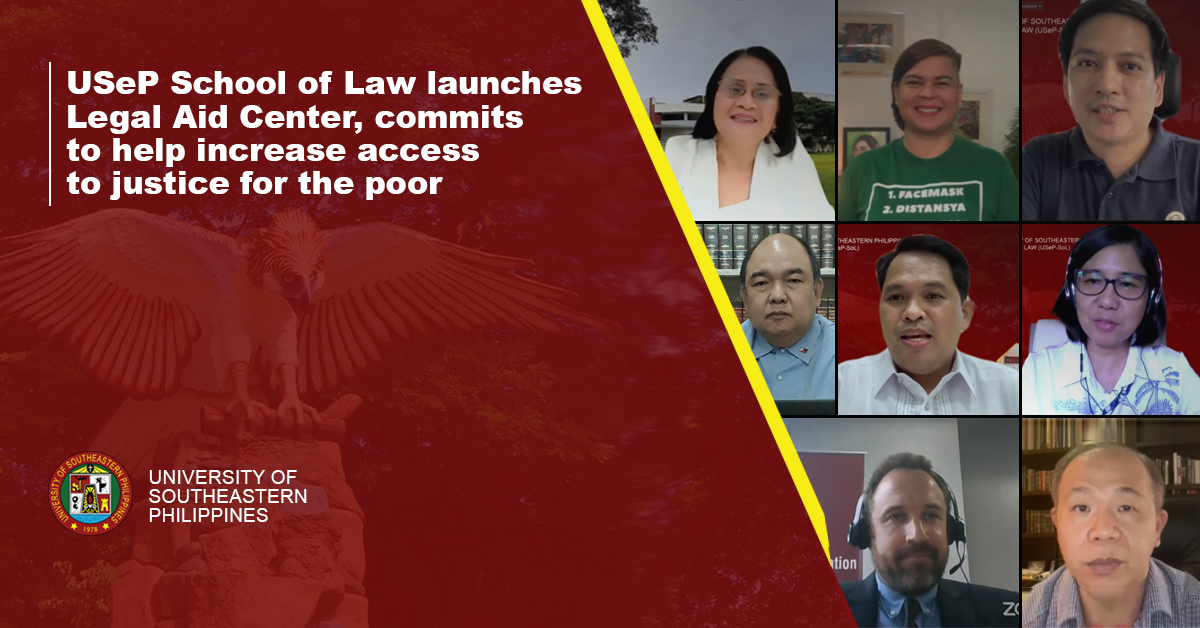 People belonging to the marginalized and vulnerable sectors often have legal problems and are usually denied access to justice. The COVID-19 pandemic has made their situation much worse. The ramifications of the health crisis often affect their human rights, including their ability to access justice in a timely, fair, and effective manner.
Committed to help in increasing access to justice, the University of Southeastern Philippines, through its School of Law, opened its Legal Aid Center on July 27, 2021.

The establishment of Legal Aid Center is pursuant to Section 9 of Rule 138-A on Law Student Practice, also known as the Revised Law Student Practice Rule, that mandates all law schools to develop and adopt a Clinical Legal Education Program (CLEP) and establish at least one law clinic.

The CLEP offers law students the opportunity to fine-tune their lawyering skills in a live-client setting by representing indigent or low-income clients under the careful guidance and thoughtful mentoring of supervising lawyers, while at the same time imbuing in them ethical values and high sense of social responsibility.
The Legal Aid Center also serves as the extension arm of the School of Law as it commits to take on the cases of the poor, the disadvantaged, and the marginalized.

The ceremonial launching of the Legal Aid Center (LAC) started in the morning with a blessing ceremony of the physical facility administered by Fr. Emmanuel M. Gonzaga and was attended by the University officials led by the University President Dr. Lourdes C. Generalao. It was followed by a ribbon-cutting ceremony led by Dr. Generalao which marked the official opening of the Center.

Dr. Lourdes C. Generalao, the University President, in her opening remarks said that opening the Legal Aid Center is an expression of ‘broadened noble undertaking’ and commitment of the University in addressing the economic and social issues of the region. Atty. Santiago said that LAC is important in increasing the access to justice and Mr. Geary also added that opening LAC in the pandemic is ‘timely’ and he hoped that USeP-LAC ‘to last for generations.’
Plaques of Recognition were awarded by Dr. Generalao to Ateneo Human Rights Center represented by Atty. Santiago and to The Asia Foundation represented by Mr. Geary.

The afternoon program was ended with closing remarks by Atty. Rogelio G. Largo, the Acting Dean of the USeP- School of Law.

It can be recalled that the USeP School of Law, the first state-run School of Law in the Davao Region, opened its doors on August 17, 2019. It hopes to produce lawyers who are not only competent, ethical, research-oriented, but also with altruistic hearts for service.