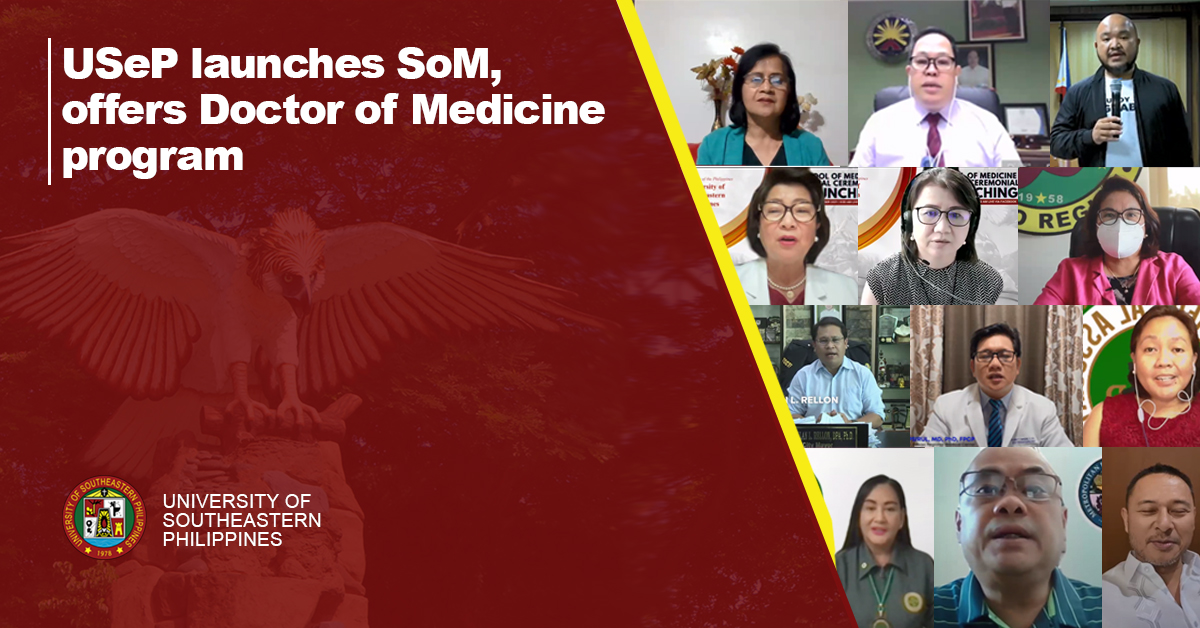 To address the shortage of doctors in the underserved areas of the country as well as to fulfill the mandate of providing medical education, the University of Southeastern Philippines (USeP) virtually launched the School of Medicine (SoM) offering the Doctor of Medicine (MD) program on October 18, 2021, via Zoom streamed live thru the SoM Facebook page (@USePSchoolofMedicine).

The launch was attended by the University officials led by Dr. Lourdes C. Generalao, University President; officials from Commission on Higher Education (CHED), several Tagum City officials, and invited medical practitioners from across the region.

In her welcome message, Dr. Melinda C. Tagle, MD, the inaugural SoM Dean, underscored that opening SoM is a response to the growing need of doctors and medical practitioners, especially at this time of the pandemic. She also promised that the University will serve the community by providing a quality and world-class health care education program.

Dr. Lourdes C. Generalao, University President, expressed her appreciation and gratitude to the people who showed their support to make the endeavor possible. She also emphasized the role USeP will play in the medical field and education in the region.

“As the only SUC in the Davao Region to operate Doctor of Medicine Program, the University is given the capacity to transform lives of individuals from impoverished backgrounds. With this influence, USeP has become a catalyst of significant change in different communities,” Dr. Generalao said.
USeP had acquired the license to operate the MD program through SoM last August 31, 2021, joining the list of successful SUCs to support and avail the Republic Act (R.A.) 11509, also known as Doktor sa Bayan Act.

Last May 25, 2018, the University also signed a Memorandum of Agreement (MoA) with the Davao Regional Medical Center (DRMC) as the MD program’s partner hospital.
Senators, led by the principal author of R.A. 11509, Senator Joel Villanueva, also gave their congratulatory remarks and challenge for USeP.

USeP, being the lone SUC approved by CHED to operate the MD program in the Davao Region, continues to live up to the University’s mantra of building dreams without limits.