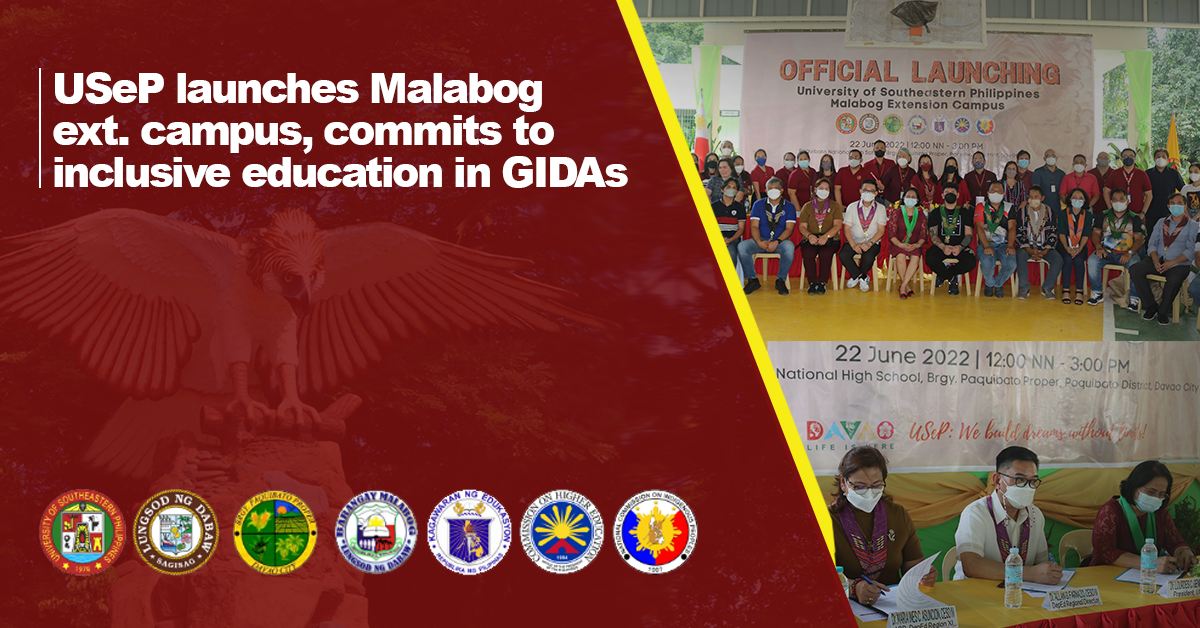 Consistent with its new vision to transform lives in the ASEAN and beyond, the University of Southeastern Philippines (USeP) officially launched, on June 22, the Malabog Extension Campus (MEC) with Bachelor of Science in Agribusiness and Bachelor of Science in Entrepreneurship as initial academic programs to be offered for the academic year 2022-2023. The Paquibato National High School (PNHS) in Brgy. Paquibato Proper, Paquibato District, Davao City serves as the temporary school site of the USeP MEC.

The launching of this extension campus intends to increase access to tertiary education by focusing on quality, being sensitive to conflicts, and recognizing the presence of indigenous peoples in geographically isolated and disadvantaged areas (GIDAs). It was made possible through the University’s collaboration with the National Commission on Indigenous Peoples, Barangay Malabog LGU, the Ata Indigenous Cultural Communities of Paquibato District, Commission on Higher Education (CHED), Department of Education (DepEd), and the City Government of Davao which funded the feasibility Study and initial budget for the construction of the academic building and other subsequent infrastructure projects at the school site.

Also present in the program were the members of the USeP Board of Regents namely, USeP Faculty Federation (USEPFFEd) Vice President, Mr. Gregorio S. Gelmo; University Student Government (USG) President and Student Regent, Hon. Joshua P. Ebo; USeP Alumni Association President, Hon. Arman A. Capin; and, the Secretary of the University and the Board of Regents, Dr. Joan D. Gervacio.

Dr. Generalao, in her speech, emphasized that the University is seeking to reach more communities, including far-flung areas, and transform them by providing inclusive and culturally sensitive higher education services. She also recalled the journey undertaken by the University in establishing the extension campus and the determination of the academic programs suited to the needs of the communities in the USeP-MEC.

“The establishment of USeP MEC is a way for the University to express its commitment to contribute to the peacebuilding programs of the Government, especially in Region Xl. This will serve the noble purpose of allowing the youth to develop themselves and become self-reliant and responsible citizens, hence, contributing to conflict transformation,” she said.

Vice President-elect Sara Z. Duterte-Carpio, the keynote speaker of the event, also congratulated the University. In her video message, she commended the efforts of the University in being an ‘active’ agent of positive change in the highland community. “Education is a right; one that, regardless of the circumstances, is something that must be accessible to every Filipino,” she emphasized.

Mayor-elect Sebastian Z. Duterte, in his congratulatory speech, lauded the top management of the University for opening the USeP-MEC as a significant development in the City’s education sector. He also encouraged the community to continue pushing the City’s and government’s initiatives and development programs to sustain the growth of the district, the city, and the whole Mindanao.

The launching ended with the temporary facilities tour for the attendees of the event.