University library had changed its name to Learning Resource Center (LRC). Information sources are also acquired in electronic format and the development of integrated library system is considered to provide easy and quality services to library users. The LRC is embracing new avenues of communication to reach out library users and applies library trends to immediately respond to library user’s academic needs. LRC’s journeys have gone a long way and the development could be visualize that the USeP LRC is at par from other academic libraries in the region.

The library also embraces the concept of knowledge management. With this, the resources will not only be acquired, organized, stored, and accessed but also disseminated and shared to the academic community, where collaborative education takes place, and where students, faculty, and staff can find the expert assistance of professionally trained librarians.

In the coming years, the library will be implementing the learning commons – it is a combination of library and computer into a full-service learning, research and project space. It will have a more user-focused and technology sophisticated services, designed to meet the contemporary information needs of the users.

Lastly, as we value client satisfaction we would like also to solicit information from our stakeholders in terms of issues and concerns to further improve our services. Feedbacks may be send to our office through our suggestion box or email us at lrc.usep.edu.ph.

We would be glad to hear from you and assure confidentiality of your information as an active partner in the operation of the center.

The University of Southeastern Philippines Learning Resource Center (USeP LRC) aims to be the modern and equipped learning center which provides and delivers authoritative information sources, advance research skills and bridges library users to the global information for intellectual development of the community.

The University of Southeastern Philippines Learning Resource Center (USeP LRC) shall support the curriculum and research, and extension programs by providing a state of the art library spaces and wide array of information sources.

The University of Southeastern Philippines is formerly the Davao Trade School which started from a modest beginning, as a secondary trade school on July 01, 1953.  The Library started with 112 book collection with a library fee of P10.00. The library imposed P 0.50 penalties for overdue reference and reserved books.  The first librarian was Ms. Apolonia Babael who served from 1953-1975.

The Republic Act No. 1950 converted the Davao Trade School to Davao School of Arts and Trades which was under the supervision of the Bureau of Public Schools approved on June 22, 1957 which stood on a six-and-a-half hectare site.  The library was located at the second floor of the Administration building (now the gymnasium).  Mrs. Martina Sumampong was hired from September 01, 1975 to September 01, 1993 managed this library.  From the period of July 11, 1954 to December 1977, the library acquired a total of 4, 627 volumes of books.

In December 15, 1978 by virtue of the Batas Pambansa Blg. 12 the Davao School of Arts and Trades was changed to University of Southeastern Philippines (USeP) a state University in Region XI which invoked the following mandate: a) to provide programs of instructions and professional training primarily in the fields of science and technology, especially in medicine, agriculture, forestry, fisheries, engineering and industrial fields; b) to promote advanced studies, research and extension services, and progressive leadership in science, agriculture, economic development of Mindanao; c) to provide non-formal education and undertake vigorous extension and research programs in food production, nutrition, health and sports development, and d) to offer scholarship and/or part-time job opportunities to deserving students from low income families.

The USeP started as an integration of four state institutions namely: the Mindanao State University – Davao Branch, the University of the Philippines-Extension division in Davao, the Davao School of Arts and Trades, and the Davao National Regional Agricultural School.  Moreover, the University expanded and named as the external campuses: 1) the Davao City Proper campus in Obrero with an area of six and a half hectares: 2) the Mintal campus, Davao City with an area 0f 2.5 hectares; 3) the Tagum campus with an area of 80 hectares; 4) Mabini campus with an area of 120 hectares; and 5) the Bislig campus in Surigao del Sur, each campus has its own respective libraries. Also, the Graduate School started as the University of Philippines Extension division in Mindanao but was integrated as a component of USeP in 1978.

In 1980, the three-storey building of the College of Arts and Sciences (CAS) formerly the Science building was constructed needing bigger, spacious and safer place. The three classrooms at the third floor of the CAS building was converted to a library with a seating capacity of 60 persons.  The College Librarian II, Ms. Florence H. Guerra was then the head of the office from 1983 to 1986. She also initiated the provision of bigger space for students research needs.

With its new location, all library materials of the different colleges had been integrated and reorganized for easy access.  The library has a total of 7,715 volumes on August 1990.

With the University status, it was at that time the University of Southeastern Philippines  library started looking for librarian with  a full-pledged Master’s Degree in Library Science and in  1986  Ms. Urabana Lagunay – Tarona was hired to manage the University Library.

In 1990, Ms. Tarona left for Australia, which left the University library under the supervision of   Prof. Romulo L. Dequito who then became Office of Student Services (OSS) Director from 1993 to 1995.

From that time the University felt the need of hiring a professional librarian with Masters degree in Library Science. Mrs. Teresita O. Eco was then hired on July 1995.

At that time, Graduate School students enjoyed the privilege of borrowing books without paying any library fees due to the absence of the board resolution.  Until in 1996, the University library proposed  a P 100.00 library fee for the Graduate School students which was also approved with Board Resolution no. 2531 s. 1996  and was implemented  in the  School Year 1997-1998.

In 1995, the library collection started to grow when Senator Raul Roco donated one (1) million for acquisition of books and periodicals out from the Country Development Fund (CDF) as promised and eventually he was invited as guest speaker during the USEP 16th commencement exercise on March 1995.

The past librarians had contributed much in the improvement of the University library. The  physical set-up had improved; the services had been gradually converted into web or technology based services; and the acquisition of  library materials  increased through purchases, gifts and donations.

Presently, the University library had changed its name to Learning Resource Center (LRC). Information sources are also acquired in electronic format and the development of integrated library system is considered to provide easy and quality services to library users.  The LRC is embracing new avenues of communication to reach out library users and applies library trends to immediately respond to library user’s academic needs.  LRC’s journeys have gone a long way and the development could be visualize that the USeP LRC is at par from other academic libraries in the region. 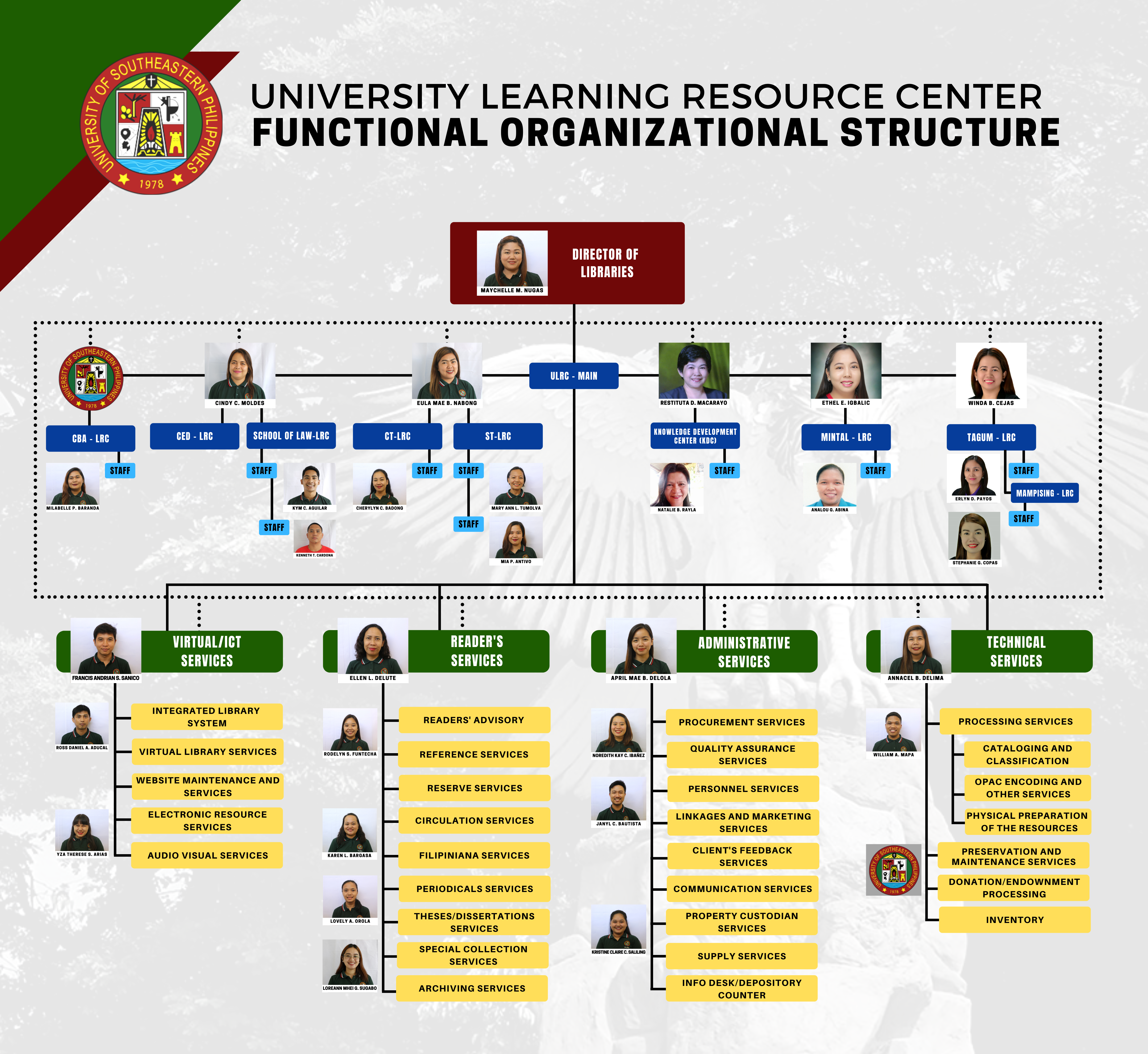