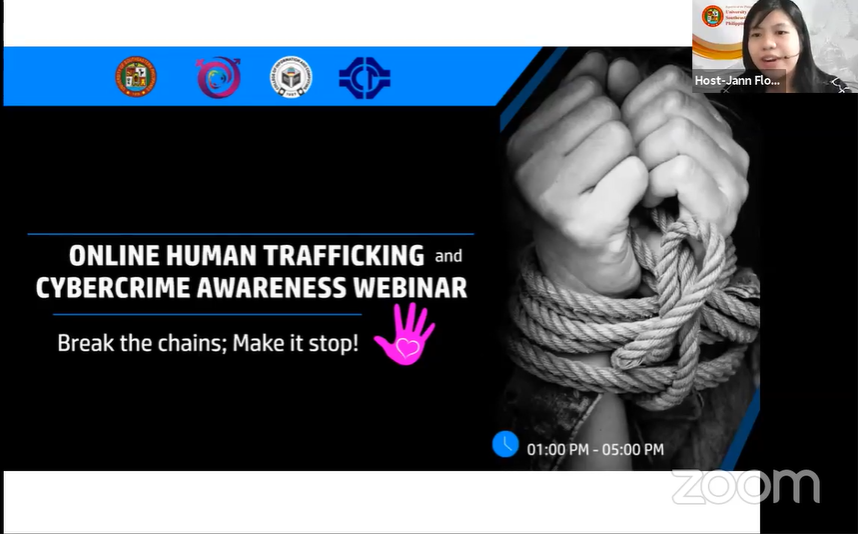 The University of Southeastern Philippines through the College of Information and Computing and College of Technology is conducting a webinar on Online Human Trafficking and Cybercrime Awareness with the theme, “Break the chains; Make it stop!” in collaboration with the Gender and Development Office.

Event Rationale:
Human trafficking has been likened to modern-day slavery that subjects children, women, and men to force fraud, or coercion for the purpose of exploitation. This horrific practice can include prostitution, pornography, and sex tourism as well as domestic servitude, factory work, migrant farming, and other forms in cyberspace. With the advent of technology, cybercrime, also called computer crime, the use of a computer as an instrument to further illegal ends, such as committing fraud, trafficking in child pornography and intellectual property, stealing identities, or violating privacy is very rampant and is happening virtually. As such, it is identified that USeP College of Information and Computing (CIC) and College of Technology (CT) in Obrero campus will be the target unit or avenue for the said webinar. In addition, the mentioned colleges do have the right audiences and participants on the issues; students and the community of these colleges are the main end-user of the technology and peripheral devices that can serve as an instrument of the crime. Today, between 20-30 million people are victims of trafficking around the world, excluding the data reported that happened in cyberspace. Approximately one-third are children. No country, no agency, and schools are exempted from human trafficking, and almost all of us, as citizens living in a globalized world, is connected to the issue in some way.
Event Objectives:
This activity is aimed at equipping participants with appropriate information regarding issues affecting gender and development such as human trafficking especially in cyberspace and its various forms and the crucial steps that a victim should consider. Specifically, this activity aims to:
1. raise awareness about the issue of human trafficking by implementing a webinar event.
2. educate the participants about the importance of Fair Trade.
3. present e-materials about Fair Trade and provide talking points regarding the benefits of buying fair trade products along with its impact on ending trafficking.
4. heighten awareness of the importance of following the steps in ethical decision-making.