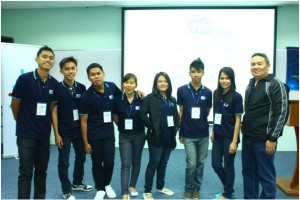 The SMART Communication, Inc. is having their 9th SWEEP Innovation and Excellence Awards with the theme “Technology in Nation-building” this year. This is an annual nationwide competition where the university has been actively participating. The goal of this year’s competition is to develop wireless solutions that will enhance and improve the capacity of people to improve their lives. The university sent ten entries, six from the College of Engineering and four from the new participating college, Institute of Computing.

Just last October 4, three representatives and their mentors went to Antipolo, Rizal to undergo a bootcamp with speakers of various business units of Smart, its sister-companies, and partners. All the 10 teams from various universities in the Philippines stayed at the First Pacific Leadership Academy.

The program proper of the bootcamp started on October 5 where Mr. Teddy Leonardo, Group Head for the Smart Technology Services, gave his opening remarks for the activity. He explained how the generation today is characterized as the “Generation C – Connect, Click, and Communicate”

Other speakers gave topics that greatly helped the teams not only on the technical aspect of their projects. The topics included cellular technology roadmap, mobile applications and how simple ideas can turn into a multi-billion company in the future, “A Start-up Business Cheat Sheet, importance of good presentation, and how significant it is to create applications that can greatly affect the community

During the afternoon session, the participants had a great opportunity to be mentored team-by-team by professionals in the industry. They were mentored in the technical and engineering aspects of their project, improvement of the marketing aspect of their project, and how to increase the impact to their project to the community. The goal of the break-out sessions was to fine-tune the teams’ concept before developing their prototypes.

The mentors of the technical and engineering evaluated individually the team projects’ process flow, technologies to be used, algorithms, frameworks, components, hardware and software requirements, the feasibility of the project and many more. Afterwards, they made suggestions and recommendations to further improve the project.

Projects in the SWEEP Competition may be marketed if desired by Smart and one of the criteria to enter and win the competition is the marketability of the project. And for this reason, marketing mentors assessed the planned business strategy of each team. They gave advices on how to prove and defend their business plan during the final competition by researching or conducting surveys to gather information to have a solid foundation on their business analyses.

Another criterion of the competition is the impact of the project to the community. The community-assistance mentor shared some ideas on how each project can have additional functionalities in order for the project not only be a medium for money-making but also a way to help the community.

To officially close the mentoring session, Mr. Mar G. Tamayo, Division Head of Smart Technology Services, extended his congratulations to all of the finalists and how happy he was for the success of the competition. After which, each team presented their project to the mentors for final questioning, clarifications, and further suggestions for the improvement of their projects.

The top 10 teams will go back to Luzon to exhibit their prototypes and defend their projects to a panel of judges during the finals that is scheduled on February 14, 2012. The top three winning teams will be awarded with cash prizes with equivalent grants for their schools. First prize is Php 500,000; second prize, Php 200,000; and third prize, Php 100,000.