The University under Batas Pambansa Bilang 12 is mandated to promote research and extension services needed in the socio-economic development of Mindanao. The Research, Development and Extension has operationalized the Innovation and Technology Support Office (ITSO) which is responsible for patent searches and management of intellectual property of USeP and half of Mindanao regions in coordination with other IP-related agencies of the government.

In the Research Division, research activities were focused on agricultural development. But, in 1986, when the University officially became a member of the R & D network of PCAARRD(Philippine Council for Agriculture, Forestry, and Natural Resources Research and Development), farming systems and socio-economics were the first flagship programs of USeP. R&D outputs were published in the University journal, The Fruit Bowl, which started the publication in 1983. Later, it became the Southeastern Philippines Journal of Research and Development.

The Extension Division on the other hand, focused on the continuing education and livelihood programs, in close coordination with the LGUs, people’s organizations and other stakeholders for manpower development and entrepreneurship. It aimed to contribute effectively in people empowerment of the region, equipping them with necessary knowledge, values, skills and competencies, and entrepreneurial abilities, to promote self-reliance, greater productivity and better communities.

In 1988, the University became a member of the newly organized SMARRDEC (Southern Mindanao Agricultural Resources Research and Development Consortium), which is one of PCAARRD’s 14 Regional Consortia nationwide. With its membership, the University’s on-going and completed R&D activities were presented and reviewed. In the 1990’s, the University expanded its collaboration and linked with other national and international R&D institutions. Likewise, its flagship has expanded to other disciplines other than in agriculture, forestry and natural resources (AFNR).

The year 2003, was challenging one for both divisions. In April of that year, SMARRDEC was transferred to USeP as the base agency. SMARRDEC was hosted by DA XI for 16 years. In the same year, the Extension Division revolutionized extension delivery programs by massive conduct of trainings on livelihood, especially in the countryside. Through the Techno Gabay program, an extension delivery modality espoused by PCAARRD through SMARRDEC, the two Divisions became active in the establishment of Farmers’ Information Technology Services (FITS) Centers in various Local Government Units in the Region. Here, the University’s R&D programs in agriculture, forestry and natural resources were mainstreamed with the regional and national undertakings. It was also during this year that information such as “ripe technologies”, trainings and other vital issues/concerns in extension were printed in the University’s extension bulletin called “Lihok Pinoy”.

During the past years, almost all extension activities such as program planning, identification of needs and clients, implementation, monitoring and evaluation were college-based. Soon after, the Division has established the “Lifelong Study Center” aimed to capacitate clientele as well as generate income to finance free services to the marginalized sectors.
Moreover, the University had shifted paradigm in prioritizing and implementing RDE projects. The concerned users of the would-be technology are involved as early as proposal preparation. To bridge the gap between technology generation output utilization. Research must be market/need-driven in order to be responsive to societal needs.

With the University’s effort to “marry” research and extension for effectiveness and efficiency in technology and information generation, dissemination and possible commercialization of technologies, a unified RDE manual, stressing processes and guidelines governing RDE, is hereby developed.
Most recently, the RDE has operationalized the Innovation and Technology Support Office (ITSO) which is responsible for patent searches and management of intellectual property of USeP and half of Mindanao regions in coordination with other IP-related agencies of the government.

The University’s RDE thrusts are geared towards the upliftment of the quality of life and poverty alleviation in the Region, in Mindanao and the country as a whole, through a sustainable development approach. Subject to formal review and consequent decision demanded by changing needs,USeP adopts the following thrusts for establishing priorities in developing, processing and funding research proposals:

The Mindanao Center for Policy and Development Studies, as a unit of the University of Southeastern Philippines, is a non-stock, nonprofit government research institution that shall engage in policy-oriented research.

Through the Center’s programs, projects, and activities, it is hoped that policy-oriented research on social and economic development, specially for Mindanao, can be expanded to assist more directly the Government in planning and policy making.

The RDEC is committed to undertake the following:

The following are the objectives of RDEC:

The following are the strategies of the RDE of the University: 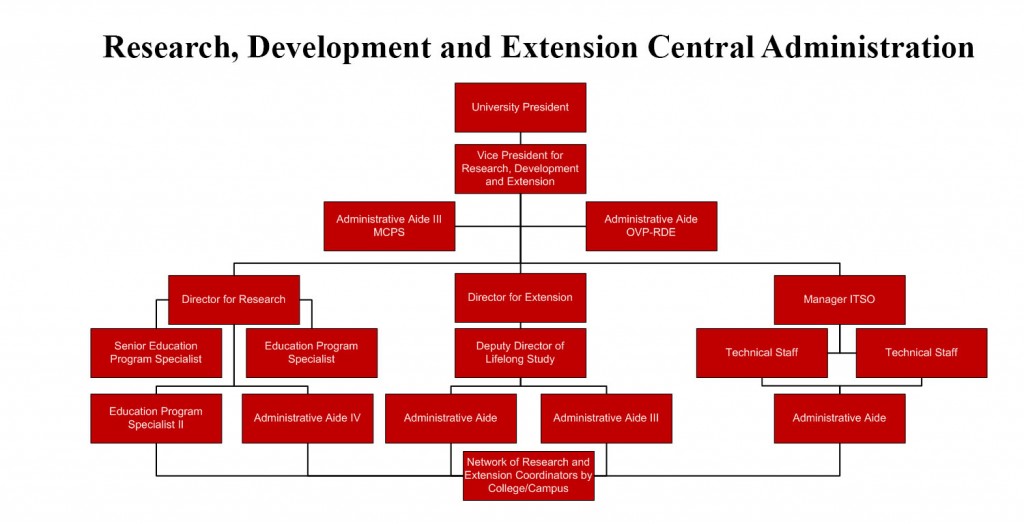